"ReSPA" is an abbreviation for the Regional School of Public Administration. 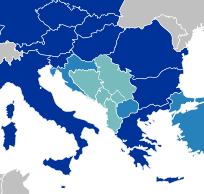 ReSPA is an international organisation which has been entrusted with the mission of boosting regional cooperation in the field of public administration in the Western Balkans. As such, ReSPA is a unique historical endeavour, established to support the creation of accountable, effective and professional public administration systems for the Western Balkans on their way to EU accession.

ReSPA seeks to achieve this mission through the organisation and delivery of training activities, high level conferences, networking events and publications, the overall objectives of which are to transfer new knowledge and skills as well as to facilitate the exchange of experiences both within the region and between the region and the EU Member States.

While primarily targeting officials from those countries which have signed and ratified the Agreement Establishing the Regional School of Public Administration and are thus members of ReSPA (Albania, Bosnia and Herzegovina, Croatia,Republic of Macedonia, Montenegro and Serbia) as well as other entities in the Western Balkans region, ReSPA's activities may also be open to officials from other countries and institutions.

ReSPA's offices are located in Danilovgrad, Montenegro, and boast modern training facilities and a Campus.

The ReSPA Initiative was initially formulated following the June 2003 Thessaloniki Agenda. Its development was later organised into different phases.

Phase 1 started on 1 November 2006. The overall objectives of this phase have been to establish the constitutional, procedural and financial frameworks within which ReSPA should operate, and to initiate certain training and networking activities through a virtual network of the national schools and authorities of public administration of the ReSPA partners.

For this purpose a Steering Committee, chaired by the European Commission, was set up to undertake the implementation of the ReSPA initiative in close cooperation with the Organisation for Economic Co-operation and Development (OECD).

Phase 2 of the ReSPA project was formally launched during the first Governing Board meeting on 23 and 24 September 2010. The three main objectives of Phase 2 are:

While EIPA provided support during the beginning of Phase 2, ReSPA is fully self-managed as of 1 October 2011.

Signature of the Host Country Agreement

The Host Country Agreement (HCA) was signed by Montenegro and ReSPA on 22 June 2011. Not only does this document have an important symbolic value, but also very practical consequences, such as:

The 11th ReSPA Governing Board meeting at the Ministerial level